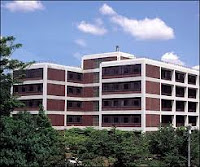 Department of Computer Engineering, Graduate School, Ajou University, Suwon, Korea
Global IT Program is established by MoKE (Ministry of Knowledge Economy) of Korea. Our department has got received 6 Master’s degree scholarship positions from MoKE this year. The program also offers students fully-paid 6-month internship in the prominent small-and-medium-sized IT companies in Korea within two-year study periods. After the internship and the graduation of the school, students could/should work for the companies at least one year if the companies want to hire them as regular employees
Qualification for Application
For foreigners with foreign parents or those who completed an entire curriculum of 16 years or more in a foreign country equivalent to elementary, junior high and high school as well as a university in Korea, those possessing English proficiency at a certain level will be able to attend lectures of the relevant department.
Master’s program
Those graduated or expect to graduate from a 4-year college (university) in Korea and/or abroad
English requirements
Advanced standing in English Proficiency Test (TOEFL, TOEIC, TEPS, IELTS)

80% of the tuition fee is waived

Higher priority of occupying dormitory rooms
Required Documents
Applicants from foreign countries must submit the following documents.
Admission will be granted based on these documents instead of the entrance exam.
All documentations must be in either Korean or English.
(Certificates in any other language must be accompanied by an official notarized translation)

For foreigners with Foreign Parents